All my life, I’ve been warned about the danger of sentence vampires. They suck the lifeblood out of words until you are too lethargic to read anything. Their paths are littered with the corpses of dynamic verbs and the ghosts of active clauses. Sentence vampires fly under the radar, hoping that people won’t notice their existence until it’s too late.  But I know better. Family writing lore has told me that I am destined to fight them. I am a sentence vampire hunter. And you can become one, too! 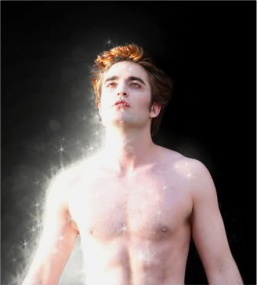 They may be sparkly, but they’re still vampires. Beware!

To hunt sentence vampires, you need to know where to find them.

Linking verbs are a good place to start, because they are a primary source of low-energy sentences. These verbs describe the subject of a sentence. They talk about what someone is thinking, feeling, sensing, or becoming. The most common linking verb is to be, but there are many others.

Linking verbs are very different from high-energy dynamic verbs, which describe actions. (I staked the vampire.) Using too many linking verbs on a page creates the perfect environment for sentence vampires. These literary predators are constantly in search of passive victims who don’t have the energy to run away. Let me tell you a tale of linking verbs, to show you what I mean.

In a sleepy small town, a sentence vampire weaves his way through the party guests at a local bar. He is searching for young people who use linking verbs. Linking verb users are his preferred victims. They are too lazy to do anything but talk, and are easy to capture. He zeroes in on a group of self-absorbed young girls who are gossiping using linking verbs.

“She seemed out of it today.”

“And didn’t she smell weird?”

“That’s because she is weird.”

The other guests near the girls are bored listening to their low-energy linking verbs. Their attention is on the football game, where action is happening. This is a perfect opportunity for the vampire to strike.

One of the girls catches sight of the vampire. She thinks he looks handsome. As he mesmerizes her with his glowing eyes, she murmurs, “I feel funny.” She passively follows the vampire. Her friends are too busy talking. They don’t notice anything. They are surrounded by linking verbs and are unable to act. Eventually they look around, but she is already gone.

Sentence vampires also like to hang around the passive voice. In a passive voice sentence, the person performing an action goes at the end of the sentence, or is left out altogether. This is in contrast to the active voice, where the acting person comes first in the sentence. The passive voice creates long sentences that wear out a reader. It can be hard for the reader to identify who performed the action.

Vampires love low-energy passive voice sentences. These sentences make it easier for them to avoid responsibility for their actions. Wondering what happened to the vampire victim in my earlier tale? Let’s find out, and see how the passive voice makes the vampires happy.

The next day, the town is abuzz. A girl was found abandoned by the roadside, suffering from a rare combination of anemia and amnesia. The sheriff holds a press conference in front of the town hall. Despite the clear evidence of sentence vampires, she doesn’t want the town to panic. So she tries to downplay the situation by using the passive voice. Her use of the passive voice allows the sheriff to avoid talking about vampires and the police’s responsibility to find them.

The sheriff escapes into her office. She is thankful that she didn’t have to say straight out in the active voice, “A vampire abducted one of our girls, and we have no idea what to do!” She’d never get re-elected.

Plus, she’d have to tell The Mayor…and you don’t want to see what he looks like when he gets angry. (Or hey, if you do, watch Buffy the Vampire Slayer, Season 3.)

The vampire watches the news conference from his lair and laughs silently. Once again passivity has taken over the town, and he has avoided being noticed. He is going to get away with it.

How to Destroy a Sentence Vampire

The best way to defeat a sentence vampire is to use the two things that they hate the most: action verbs and the active voice. Start most of your sentences with the person performing the action, and try to make that action a dynamic one. Then you, too, can be a successful sentence vampire hunter!

I watch the sheriff deny the existence of vampires using wimpy passive sentences, and I think not this time. I grab my writing tools and head for the outskirts.

I kick down the door and confront the vampire in his lair. The vampire laughs at me and attempts to capture my gaze. I shake off the effects of his eyes and shoot a crossbow bolt through the west-facing window. Sunlight streams in and surrounds the vampire in a fiery haze. The vampire screams and disintegrates into a pile of inky black dust.

I’ve finally brought the sentence vampire to light. My work in this town is done. It’s time to walk off into the sunset and move on to the next page. Such is the wandering life of a sentence vampire hunter…

16 thoughts on “Tale of a Sentence Vampire Hunter”