When I first ran across fantasy author Alex Hurst’s blog, I was immediately attracted by the quality of her writing (as evidenced in her Archetypes in Fiction series) and her beautiful photos. I soon found that Alex is also a wonderful person who is very supportive of her fellow bloggers. During the April A to Z Challenge, Alex wrote an excellent series of posts about her life in Japan. I asked her if she would like to come by DBW to speak about her experiences communicating in a different cultural environment. Here is our conversation about travelling, introversion, English teaching, and the perils of ferocious kanji.

On your About page, you talk about travelling around the U.S. while growing up “in the wilds of the south.” How did you go from being a local traveller to living in Japan? And did you find your experiences of moving around helped you at all as you made that transition?

Well, that’s a very long story, but I’ll try to keep it short and interesting. I was born close to a bayou in Louisiana, where I spent a lot of my formative years playing outside in the woods around our property. My father collected a lot of Asian art, as well, so when I wasn’t outside pretending I was on some grand adventure with my siblings, I was inside looking at Buddhas, thangkas, and giant calligraphy scrolls. This would become important later, naturally, as my interests shifted from living in the U.S. to studying Japanese, and eventually coming to live in Kyoto.

A few years after my family moved to California, when I was around twelve, my family decided to have a real grand adventure and circumambulate the United States in our car. For 10,000 miles, it was just my father and my three younger siblings, with my mother staying in San Francisco for work. Though there were hard days, I think that was when I caught the travel bug. I need to explore, to go to new places, and often, as with Japanese, I tend to choose things that I know I’m not inherently good at, in order to challenge myself. But yes, moving around so much as a child, and my home life, more than prepared me for the move. When I came to Japan, I didn’t experience any culture shock and settled in quite quickly. However, whenever I visit my U.S. home, I always find myself getting what’s known as reverse culture shock, and that’s a bit uncanny, given how long I lived there!

It’s funny how that happens sometimes. I think it’s wonderful that you challenged yourself to learn Japanese and experience a new culture. I’m curious – what are some of the key differences that you notice when you come back to the U.S.? And what do you like most about the Japanese culture?

If I were to go with the first thing that pops into my head: the noise. U.S. Americans, and Canadians, are just louder, in all things. When I lived stateside before, I never noticed, but in Japan, things are so quiet all the time. On the train or bus, no one talks to each other (it’s considered rude). In restaurants, conversations are carried on as quietly as possible. Even in parks, children are so quiet that you can still hear the small birds in the trees several meters away. My ears have become much more sensitive to sound while I’ve been here, so when I go home, I constantly find myself flinching to regular noises, as if someone is always yelling when they shouldn’t be.

Otherwise, I would say the openness of Westerners is much more pronounced once you’ve been in Asia for a time. People like to keep direct eye contact in the West, shake hands, even hug strangers. There is a certain willingness to bare yourself to another human being in even the most base of interactions. But in Japan, it can take years to get to that point, and not even family members hug one another. It’s actually one of the quickest ways to make a young Japanese person uncomfortable: hug them. However, every now and then I find an old lady who is more than eager to get a hug from the exotic foreigner.

That’s not to say that either extreme of the above two observations are bad. I love both cultures for those things, in different ways. I’m just generally more quiet and reserved, being a low-key introvert, and so coming to Japan and adjusting to their way of things was very easy. But I do miss big bear hugs and people’s general, every day excitement in the West. 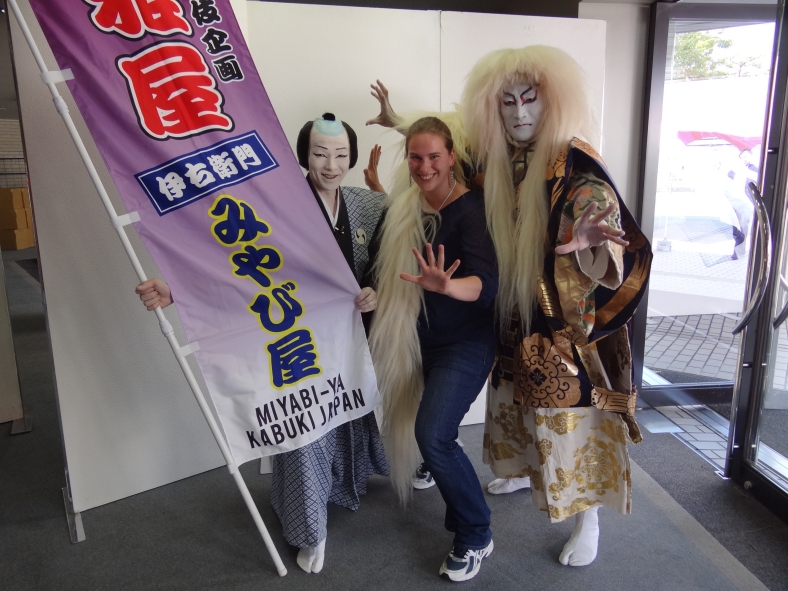 Of course, there’s excitement here too…

As an introvert, I can relate to enjoying the quiet. 🙂 You mentioned that it can take a while to get close to someone in Japan. How did you go about making connections with others? What kind of new communication approaches did you need to learn?

That one’s a bit tougher! To make connections with other people in Japan, I didn’t change much inherently about myself, or my approaches in meeting people. I can’t honestly say that I “cracked the cultural code” in my time here, either. I did have to learn that where Americans are often shown to pigeon hole their friends (golf friends, poker friends, shopping friends), the Japanese people I’ve met are even more intense in their separations. It feels, at times, that my friends will not discuss any family matters with me at all because I am not family, or will only discuss one subject consistently, and it’s usually the topic we met under (like traveling). The only exception to this has been in the relationships I’ve built with my adult students over the years. Because I can decide the topic, I’ve gotten to know so many of them very well through our English conversations in class.

My best example of this is actually also my best friend in Japan. We chatted weekly for about a year, going to various places around Kyoto together and talking all about cultural differences between America and Japan, before I even found out that he was married and had a daughter. A full year! When I asked him why he never talked about them, he said that it was his private life, and not something he shares. And he is the most open person I know!

I’m curious how this type of separation works for the Japanese in the age of social media, where everything ends up online. How are online social platforms used?

Actually, social media is not used in the same way it is used in America, I think. Most Japanese people use Twitter or mixi (the Japanese equivalent of Facebook), but they use it to share photos, mainly, or gush about various things they are interested in. I don’t have a mixi account, but the friends that do use Facebook use it like Instagram, taking photos of food (sometimes adding very detailed explanations of the daily bento they are making for their children every morning). I rarely see a post that discusses anything personal. In that respect, I think Japanese people are still a bit reserved about digital things. The use of credit cards is still quite low (you can’t use a credit card to pay for a lot of things over here – it’s a cash-based society), and I think the mistrust of digital presence is one of the reasons it hasn’t changed (much to the chagrin of international visitors).

I’d love to hear more about your experiences working with your adult (and child) students. Did you find there were aspects of English that were difficult to teach? What helped you?

English has proved a very difficult language to teach, once you move past the stage of simple vocabulary and grammar study. I’ve found that prepositions are the most difficult. Japanese only has a handful of prepositions (は、が、に、を、で、として), which can be combined to create a further meaning, similar to the combination “into” in English. However, as most people know, English has well over a hundred prepositions, and their meanings are quite distinctive. As a native speaker, these meanings are quite clear, but for a Japanese learner, where に [ni] can mean ten different things (screenshot attached!), the idea that prepositions aren’t flexible is a difficult hurdle to overcome. 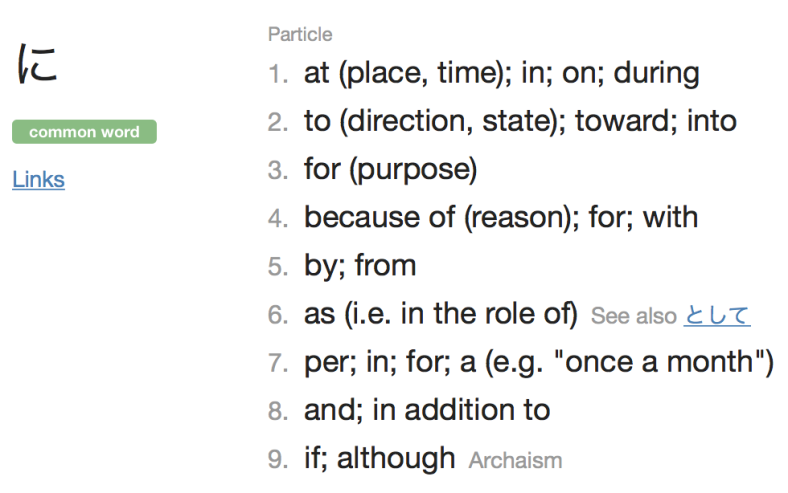 The other thing that is hard to teach is stress in speech. Take the sentence “I never said she stole my money.” In writing, this is rather simple, and in certain contexts, the meaning is quite clear. But, change the stress on any word, and the meaning actually changes! So, teaching this is also difficult, since in Japanese, there are basically no stresses in a sentence until the very end. Their stresses denote questions, or confirmations, or invitations to respond. Ours are quite trickier, I think!

Teaching these things is difficult, but also fun. I find that doodling on the white board helps a lot, to show the difference between being “at” a place, and being “in” a place, or “on” a place. For intonation, I get my drama on, and exaggerate my delivery in speech, so students can understand the real meaning of a sentence based on how it is spoken.

Thanks so much for sharing your experiences in Japan with my readers. It’s been great having you here. One final question: Do you have a favourite kanji or Japanese expression that you’d like to pass along for those of us who may visit Japan someday?

Oh, yes, I do have a favorite kanji. It is not really practical, in the strictest sense, but that is what elevated it to “never forgotten” status in my mind.

The kanji is: 悪循環. It is read aku-jun-kan and means “vicious circle.”

Why is this my favorite kanji? Well, when I was in my third year of studying Japanese, the kanji understandably got way more difficult. And our teachers gave us a lot of kanji to study, many of which we would never need again, like “International Date Line” (don’t ask me why). But akujunkan became this sort of mantra in my class. The students would repeat it all the time, and even start using it as the reply-all to any complaints about the class. So, it’s very much an inside joke, but given the stressful course load and its compounding effects on mental health, it definitely fit.

Thanks so much for the wonderful interview, Sue! I had a fabulous time! 🙂

For more about Alex, I would encourage you to check out her blog or her latest illustrated novella, D.N.A.

Do you have a question for Alex, or a comment on our interview? Please leave your thoughts below – we’d love to continue the conversation with you!

29 thoughts on “Conversation Corner with Alex Hurst, Author and Traveller”