Last year I posted a prologue for a series of stories I wanted to write about Captain Comma and her crew. I’ve finally had time to write the first tale. Since we’ve just been through Valentine’s Day, I decided now was a good time to post it. Enjoy! 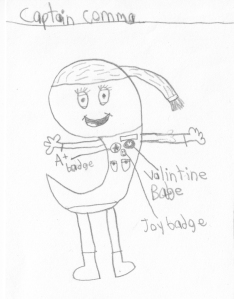 Today I received the details of our new mission from Admiral Apostrophe. Spot and I were in the middle of enjoying our usual romantic Valentine’s Day dinner (cheesy vegetarian lasagna for me, spicy chocolate-flavoured protein cubes for Spot) when we were interrupted by the system notification of our new story destination. It would have to be YA fiction…

We’d materialized in the middle of a stereotypical high school corridor. Institutional grey lockers lined the walls, interrupted occasionally by beige classroom doors with narrow cross-hatched windows designed to keep out the light. The linoleum floors were a speckled white that failed to hide the stains. I could smell the remnants of rotten food, sweat, and desperation.

“Why do they have to make everything so bleak? It’s not like high school is the end of the world. Heck, I survived it just fine.” The Sergeant casually waved around his semi-automatic punctuation gun.

“Easy for you to say,” murmured Ensign Parenthesis. “You weren’t the skinny wimp who got picked on by all the girls.”

“Enough. We’re not here to change the tone, we’re just here to observe and see what sentences need fixing,” I said.

“Well, there doesn’t seem to be anything happening here, Captain,” said the Sergeant. Spot barked her agreement, littering an exclamation mark on the floor. Normally I’d be upset by her failure of protocol, but in this place, it’s not like anyone would notice.

A bell shrilled, and students began to pour out into the hall. Holding out my scanner, I looked for the source of the word disturbance.

I looked up to find a group of four girls coming towards us. Although they were dressed in bright colours, their mannerisms were dull and impassive. They moved jerkily down the hall, shuffling their feet as they spoke to each other in monotonous voices.

“Suzy did you hear what happened to Scarlet.”

“Well I heard that Brandon was going to ask her to go out with him. But then Jacinda got to him first and told him Scarlet was a horrible witch that nobody liked.”

“Oh I don’t know. It’s not as if she’s exactly Brandon material.”

“Freeze page,” I commanded. The girls halted steps away from Ensign Parey, who backed away cautiously.

“Well, that was exciting,” said the Sergeant. “Luckily, I know just the thing to spice things up.” He patted the enormous barrel of his gun.

“Sorry, Mico, but I don’t think we’re going to need the heavy guns today. Looks like a classic case of comma failure.”

“I knew you were going to say that.”

“Your time will come,” I promised. I pulled out my punctuation phaser and set it to “Vocative comma.” “Parey, do you recall what the vocative comma is for?” I figured a distraction was in order, since he was looking a little green.

“Um…isn’t that something you use when you’re addressing someone by name?”

“Excellent,” I said, and fired.

“Suzy, did you hear what happened to Scarlet,” said the first girl, and stopped.

“I still think it’s creepy when we do that,” said Parey, who bravely came up to examine her.

“Aw, you get used it,” said Mico. “You just have to remember they’re not actually real.”

While the two of them talked shop, I set my phaser to rapid interjection with yes/no on a comma setting. I didn’t think we needed any exclamation marks. That dialogue was bad enough already.

Spot pawed at my polished regulation boots and cocked her head at the teenagers.

“All right, Spot. Go ahead and give them their question marks, so they can come alive.”

Spot barked twice, and we were ready to replay.

The girls bounded down the corridor, talking animatedly and gesturing with their hands.

“Suzy, did you hear what happened to Scarlet?”

“Well, I heard that Brandon was going to ask her to go out with him. But then Jacinda got to him first and told him Scarlet was a horrible witch that nobody liked.”

“Oh, I don’t know. It’s not as if she’s exactly Brandon material.”

Parey watched them as they continued on down the corridor. “I can’t say I’m going to miss this place. Talk about bad memories.”

“What did you think of high school, Captain?” asked Mico.

Well, the mission was successfully accomplished. It’s been a while since I’ve had to correct interjections. Visiting that YA story made me think about all the drama that I went through in high school. I wonder how Slash is doing now, and if I’ll ever see him again…

Thank you to my son for the fabulous illustration.

I hope you enjoyed the first Captain Comma story. Stay tuned for further adventures! And if you have any comments, suggestions for future story topics, or questions about commas, please feel free to post them below. Thanks for reading!

© Sue Archer and Doorway Between Worlds, 2016