Happy Hallowe’en, everyone! I hope you are having a ghoulishly good time. I will shortly be shuffling through the streets with my son in search of brains, but before I do, I want to share some frighteningly fantastic news.

My grammar story “Abracadabra! Addressing Affect vs. Effect” has been published in the fall issue of The Ghouls’ Review by Grammar Ghoul Press. If you’re in the mood for creative reading treats so delicious they will pop out your eyeballs (ah, those pesky loose eyeballs), come by and haunt this fiendish site!

(There is also a monstrous picture of me, where you can see what I look like at midnight.)

Welcome to A to Z! To kick off my alphabet series on rogue words, I’m addressing the many magical properties of the words affect and effect. These slippery tricksters can give us all sorts of spelling grief.

Affect as a Verb

One meaning of affect is “to pretend, feign, or assume a characteristic.” 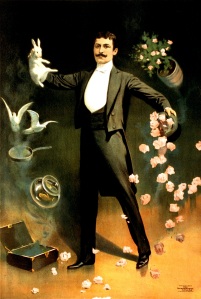 Albert the magician affected an air of confidence as he prepared to cast, but in truth, his insides were trembling.

The second (and most common) meaning of affect is “to influence or have an effect on.”

More than anything, Albert wanted his spell to affect the red-haired woman in the front row. He yearned to hear her declare her undying love for him.

Effect as a Noun

There are three main ways that effect is used as a noun.

One usage is the bizarre term “personal effects” to describe the things you keep in your purse or pockets.

Esmeralda wondered why the magician had needed one of her personal effects to perform a simple stage illusion.

Another meaning comes up a lot in stage work and movies:

As the magician waved his wand and chanted some words, Esmeralda waited for all the sound and light effects to kick in. Nothing happened.

The most common meaning of effect is “result or consequence.” Affecting something means you have an influence on it (like a magician’s influence on another person). The result of this influence is an effect (like a declaration of love). Which brings us to…

Albert looked expectantly at the woman to see the effect of his spell.

Affect as a Noun

Let’s look at the unusual case where affect is a noun. In psychology, affect is used to describe someone’s emotional state.

The red-haired woman’s affect had changed, but it wasn’t lustful happiness — more like terminal boredom.

Effect as a Verb

And finally, effect can be a verb that means “to bring about or produce.”

Albert was dismayed to find that his spell had not effected the change he had wanted. Instead, his stage rabbit jumped up and began to compulsively nibble on his ear.

The moral of the story?

Affect is almost always a verb, which has an effect that is a noun. To remember the rest, just think about Albert and Esmeralda.

And don’t give strange magicians any of your personal effects.

Since I am addressing affect vs. effect, it makes sense for me to talk about address, which can be difficult to spell. Think of add + dress – the first has two “d”s, and the second has two “s”s. Put them together and you have address.

Esmeralda was not going to add that magician’s name to her address book. Not only was he an awful magician — he was terribly dressed. And that rabbit accessory sure wasn’t helping.

This post is dedicated to Nicole de Courval and Olivia Berrier.

Definitions are from Garner’s Modern American Usage, with some help from the site Common Errors in English Usage

Thanks for reading! Stay tuned for tomorrow’s post, where I will blindside the bothersome letter B…

© Sue Archer at Doorway Between Worlds, 2015