Who can forget the daily drama of potion class with Professor Snape? If you’ve read (or watched) Harry Potter, then you know what I’m talking about. Harry and Ron are hopeless at modifying their potions. There’s always some kind of mix-up. The two Hogwarts students are often bracing for an explosion: Malfoy’s explosive laughter, Snape’s explosive rage, or their own explosive cauldron. If they didn’t have the help of clever Hermione, Harry and Ron would never get through it. 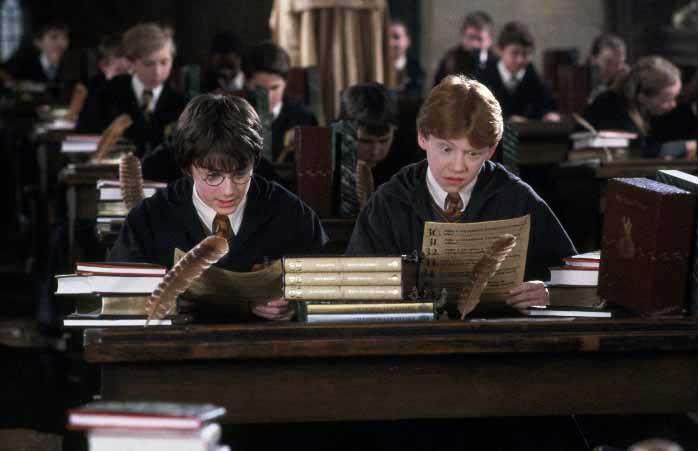 This ingredient list makes no sense at all! Where’s Hermione?

If you think modifying potions is hard, that’s nothing compared to modifying words or phrases. You need lots of butterbeer to get through the mix-ups that can happen when you use modifiers. You can have misplaced modifiers, dangling modifiers, or squinting modifiers. And there’s no Dumbledore to give you guidance. (Luckily, you have me.)

Misplaced Modifiers: May Cause You to Vomit Slugs

With a misplaced modifier, you are modifying a word you didn’t intend to modify. You can avoid this problem by putting your modifier just before the word you are modifying. Do this and you won’t be like Ron, who modified himself instead of Malfoy when he misfired a spell. Then he got stuck with a sluggish digestive system.

To illustrate misplaced modifiers, let’s talk about how bad Harry and Ron are at making potions.

Harry and Ron messed up almost every potion.

Wow, Harry and Ron are terrible at this. This means that most of the potions they make are failures (almost all of them). But what if the situation is not quite that dire?

Harry and Ron almost messed up every potion.

Okay, things aren’t so bad now. They almost messed up every time, but managed to pull through. (Maybe Hermione was whispering the answers to them.)

You can see that where you place almost makes a big difference in the meaning of the sentence.

Let’s say our two fledgling wizards don’t know how to answer Snape’s question about a potion. Snape is not amused.

Snape yelled only at Harry.

Phew, Ron got out of it this time! Only Harry is being yelled at. But maybe I meant to say this instead:

Snape only yelled at Harry.

Snape hated Harry so much that he only yelled at him. He never talked to him or whispered to him. He just yelled. Everyone pulled out their earmuffs from Professor Sprout’s Herbology class whenever Harry and Snape were in the same room.

Misplaced modifiers can happen with modifying phrases, too.

Thundering towards them, Ron was afraid that Snape would transmogrify them into slugs.

Who is thundering towards Ron and Harry? It looks like Ron is doing the thundering, which makes no sense (unless he used the time turner, and there’s two of him). Let’s put that modifying phrase next to the word we want to modify (Snape):

Thundering towards them, Snape made Ron afraid that they’d be transmogrified into slugs.

Now it’s clear who is being modified in this sentence. And it’s not Ron (fortunately for him).

Remember: Misplaced modifiers = slimy slugs + Snape in a rage. They are bad news.

Dangling Modifiers: May Cause Dizziness While Flying

With a dangling modifier, the modifier is describing something that isn’t even in the sentence. It’s hard to identify what’s being modified (so you’re left dangling). You can avoid this problem by making the subject of the sentence clear. Don’t be like those clueless students who couldn’t identify who was causing Harry to dangle off his quidditch broom. (The dementors, of course.)

To illustrate dangling modifiers, let’s continue with our potions story. Ron couldn’t answer a potion question, and now he is worried about a raging Snape.

Cowering at his desk, Hermione waved her hand frantically.

Who’s cowering at a desk, and what does that have to do with Hermione? Right now, Hermione is the subject of the sentence, and she’s too brave to cower. Let’s fix this by adding in the true subject (Ron).

Hurrah! Hermione is coming to save the day by answering that question! Ron owes her big time.

While blurting out the answer to Snape’s question, Snape sneered.

Apparently Snape doesn’t like it when he blurts out the answer to his own question! Wait a minute, that can’t be right…

While Hermione blurted out the answer to Snape’s question, Snape sneered.

Of course Hermione knows the answer. Bless you, Hermione. You are too good to Ron and Harry. But now that you are the subject of the sentence, you’ve put yourself in Snape’s way…

Remember: Dangling modifiers = Quidditch match injuries + Snape in a bigger rage. They can cause a lot of damage.

Squinting Modifiers: May Cause Headaches and Confusion

Our final modifier culprit is the squinting modifier. A squinting modifier happens when the modifier is placed between two things, and you’re not sure which one it modifies. You keep squinting to make it out, but it gives you a headache. You can avoid this by rewriting your sentence. Yes, that takes work. But it’s easier than figuring out the real Harry when a bunch of wizards drink Hermione’s polyjuice potion and look like Harry. Confusion to all Death Eaters! (But hopefully not to you.)

Snape’s attention is now focused on Hermione, who is trying to answer the potion question.

Ouch! But what is Snape saying? Is he saying that children who seek attention once in a while (rarely) are intelligent? I’m guessing that’s most of his class (including Hermione, who’s learned not to seek his attention except under desperate circumstances). Nope, that’s too nice for Snape. Does he mean that children who like to get attention are usually stupid? Probably. But the sentence is not clear, because the modifier rarely is between attention and are intelligent.

Whatever he said, Hermione doesn’t like it. And she knows how to master modifiers.

“Teachers who bully others often are compensating for their insecurities,” retorted Hermione.

Does Hermione mean that teachers who bully others a lot (often) are insecure? Or does she mean that teachers who bully others are often insecure? It could go either way here. If Hermione wanted just the second meaning, she would have said “are often” instead of “often are.” But Hermione is trying to give Snape a headache thinking it over. Great job, Hermione!

(But maybe not so great for Gryffindor house.)

Remember: Squinting modifiers = Hermione’s clever double meanings + Snape in a towering rage. They cause a loss of fifty house points from Gryffindor.

But it was worth it.

This post is dedicated to TL, who asked me to write about where to place modifiers in a sentence. If you have a topic request for a future post, please contact me.

8 thoughts on “Warning: Mixing Your Modifiers May Cause Explosions”